At St. Philips, we’re proud of our Moravian and our African-American history and are working to keep these traditions alive and growing for a new generation.

In 2019, St. Philips celebrated its 197th anniversary and still remains the only Black Historic congregation in the country. St. Philips is a source of education for hundreds of school children from all parts of North Carolina and for foreign and out of state visitors on a daily basis as they visit the African- American Complex at the Old Salem Museum and Gardens.

As a member of the Salem Creek Regional Conference of Churches St. Philips participates jointly with member churches, Home, Trinity and Messiah Moravian to foster the ideals of Moravians and enhance the growth of our churches and the care for our youth and senior membership.

We’re hoping that you and your family will become a part of the next chapter of the St. Philips story.

The St. Philips African-American Complex in Old Salem is a sacred place significant to the unusual and unique history of this community, and it is a touchstone of the African-American experience. 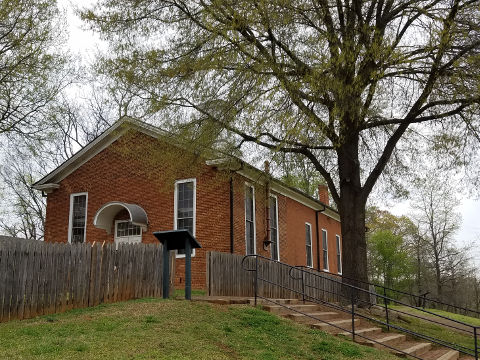 The St. Philips African-American Complex at the Old Salem Museum and Gardens includes:

St. Philips in the Modern Era

From the beginning of the slave worship services in Salem, The Brick Church was called the Slave church, the Black church, the Negro church, the Colored church, or the African-American Church, until on December 20, 1914, Bishop Edward Rondthaler bestowed upon the Southern Province’s only African-American congregation the name of St. Philips Moravian Church.

In the spring of 1952 the last regular service was held at the Brick Church location. The St. Philips congregation was moved to the community house in the Happy Hill Garden Complex. Services were held there until April 5, 1959, when a new chapel located on the Corner of Mock and Vargrave Streets, was consecrated. The congregation remained in the Vargrave Street location until it learned that the plans for US Highway 52 would send the highway through the church property. Instead of building a new church the Southern Province located an existing one, the former Bon Air Christian Church on Bon Air Avenue.

On May 4, 1967, the 144th anniversary Sunday of the congregation, the church on Bon Air Avenue was formally dedicated and housed the congregation until it's 197th anniverary, when it returned to the Brick Church location in Old Salem.

For more information about St. Philips Church, please contact us at the church office at 336-770-5933 or visit Old Salem Museum and Gardens.